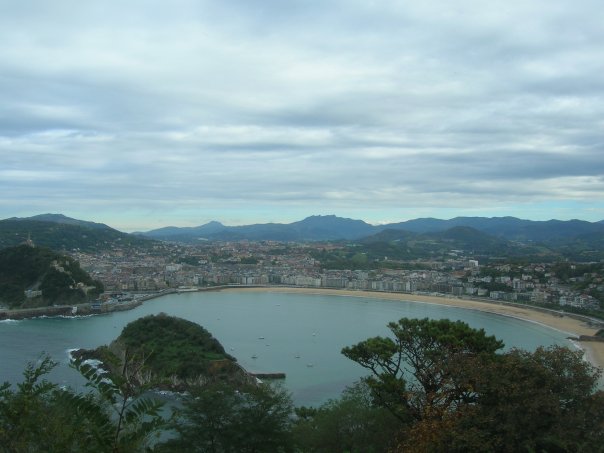 We love to travel for food and, without a doubt, one of the culinary treasures in Spain is San Sebastian. There is a high concentration of Michelin starred restaurants around San Sebastian. Dan, who previously wrote about Martinique, lived in San Sebastian working as a teacher. Here are his practical travel tips should you visit. 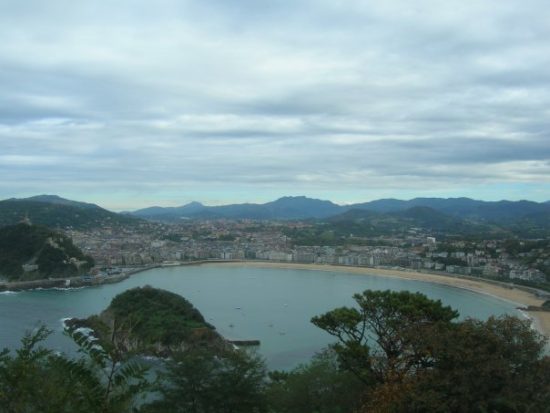 San Sebastián/Donostia, a small city in Spain’s Basque Country, is best known for its beautiful natural scenery, neoclassical architecture, unique food culture, and distinctly Basque attitude. I lived in San Sebastián for a year when I worked as an English teacher and it is, without contest, my favorite city in the world. It is a small but lively city that is rooted in tradition and local pride. It’s located right on the northeast coast of Spain, only an hour from the French border.

San Sebastián is the capital of Gipuzkoa, a province in Spain’s Basque Country. Locals identify themselves as Basque, not Spanish. The Basques have their own history, culture, and language. For example, you will see the city referred to in Spanish as San Sebastián, but more commonly in Basque as Donostia.

Getting there by plane:

The only direct flights to San Sebastián (Airport code: EAS) are with Iberia from Madrid and with Vueling from Barcelona. In my year of living in San Sebastián, I never once flew into or out of that airport. It was always cheaper to fly to nearby Bilbao (BIO, aka Loiu Airport) and take an hour-long bus to San Sebastián directly from the airport with PESA bus lines (€17,10 one way).

Another nearby airport is in Biarritz (BIQ) in France, which is about an hour away from San Sebastián by car. Taking public transportation between Biarritz Airport and San Sebastián is complicated and sporadic. I only did that once and I do not recommend it. I had to take a cab from the airport to the Biarritz train station, then catch the train to Hendaye, then switch to another train to get to San Sebastián. It’s probably not worth the trouble.

Getting there by train:

It is also possible to take a 5-6 hour Renfe train from Madrid (Chamartín) or Barcelona (Estació de Sants) to San Sebastián, which usually costs between €30 and €50 one-way. Accessing San Sebastián from France is also possible. I have found cheap TGV tickets from Paris-Montparnasse for about €20 one-way to Hendaye, France. The trip takes about six hours and when you get to Hendaye, you catch a local train (Euskotren, aka El Topo) to San Sebastián, which costs around €3 one-way and takes a little more than 30 minutes.

Getting there by bus:

If planes and trains are not your thing, you can also catch buses from places like Madrid or Barcelona with the Alsa bus line for about €35 one-way.

Getting around the city:

One of my favorite things about San Sebastián is its size. It is very manageable and can be very easily toured on foot. However, there are city buses to get around. There is also system of Renfe Cercanías (commuter) trains, as well as the Topo (Euskotren) to get to other places in Euskadi (Basque word for Basque Country).

My favorite thing to do in San Sebastián was to walk along Paseo Nuevo (Pasealeku Berria), which goes around Monte Urgull and offers incredible views of the sea.

There are several neighborhoods in San Sebastián but I am only going to focus on three. 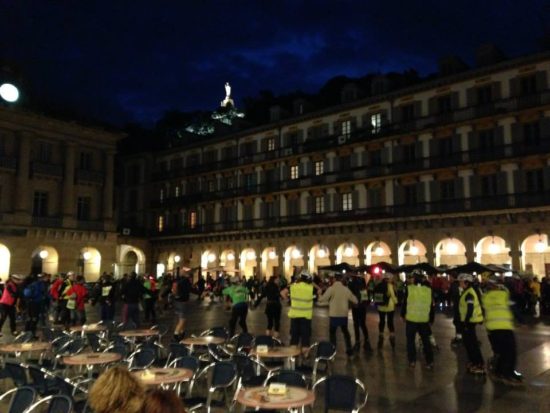 I lived in Parte Vieja (aka the Old Part), which I’d say is the liveliest part of the city. It’s almost all pedestrian with small, narrow streets filled with shops, bars, and restaurants. It is also where you will find the Plaza de la Constitución, the city’s main plaza. Parte Vieja is at the base of Monte Urgull and directly in between the beaches of La Concha (Kontxa) and La Zurriola. I recommend spending lots of time in this neighborhood; but if you enjoy sleeping during weekend nights, I would advise you to find a hotel or apartment in a different neighborhood. 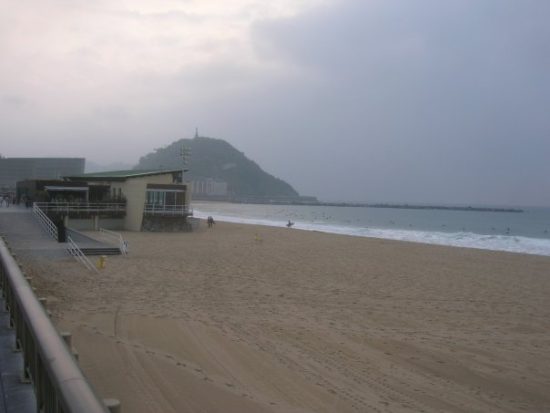 A lot of my friends lived in the Gros neighborhood, an area directly south of Zurriola beach. Gros, despite what it sounds like in English, is a beautiful neighborhood with bars, restaurants, shops, and plazas but doesn’t get as rowdy as Parte Vieja.

Centro is a very aptly-named neighborhood in the center of San Sebastián, opposite Parte Vieja on the other side of the Boulevard. This neighborhood is where you’ll find La Concha beach, La Catedral del Buen Pastor, as well as many big clothing stores and markets.

San Sebastián is very famous for its food culture, especially pintxos. Pintxos are similar to tapas, but smaller – usually just a few bites. They can be very simple or very intricate, depending on the place you visit. Normally at a pintxo bar, there will be an assortment of cold pintxos out in the open on the bar. There is usually a menu of hot pintxos to order as well. It’s very common to go pintxos bar-hopping, going to several different bars for a drink and a few pintxos. Most pintxos range in price from €2-€5, so be careful because they add up quickly.

Like the rest of Spain, lunch time is usually between 1pm-3pm and dinner is usually after 9pm, but more commonly between 10pm and 11pm.

If you are in the Basque Country for cider season (late January to early April), I highly recommend going to a sagardotegi, or Basque cider house. Usually found outside the cities in small towns out in the country, a sagardotegi is a place to experience authentic Basque culture. There is a set menu at every sagardotegi, including tortilla de bacalao (cod omelet), bacalao con pimientos (cod with peppers), txuleta (thick cut grilled steak) and cheeses, nuts, and membrillo (quince paste) for dessert. Oh, and all the cider that you can drink. The cider is kept in huge barrels, which you catch in your glass as it shoots out of the barrel. I went to Petritegi in Astigarraga. It was one of the most fun nights of my life. 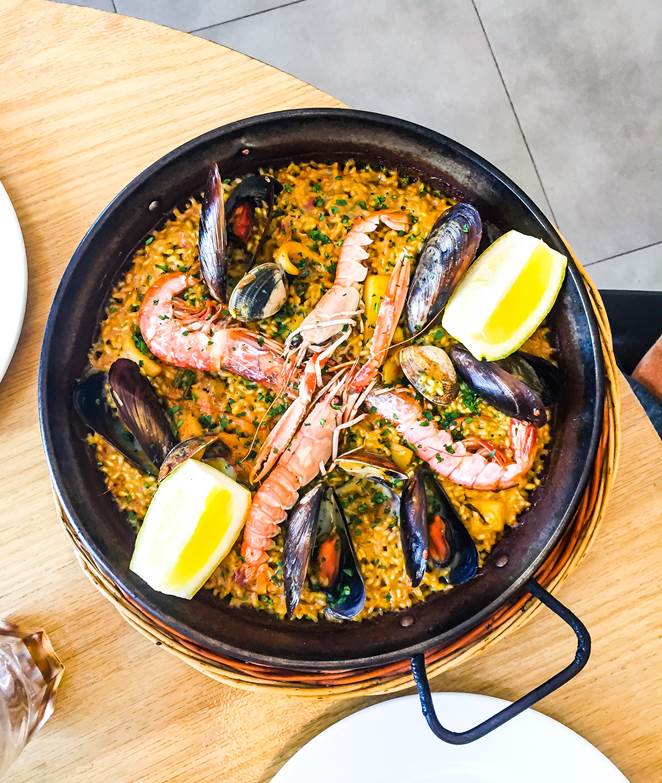 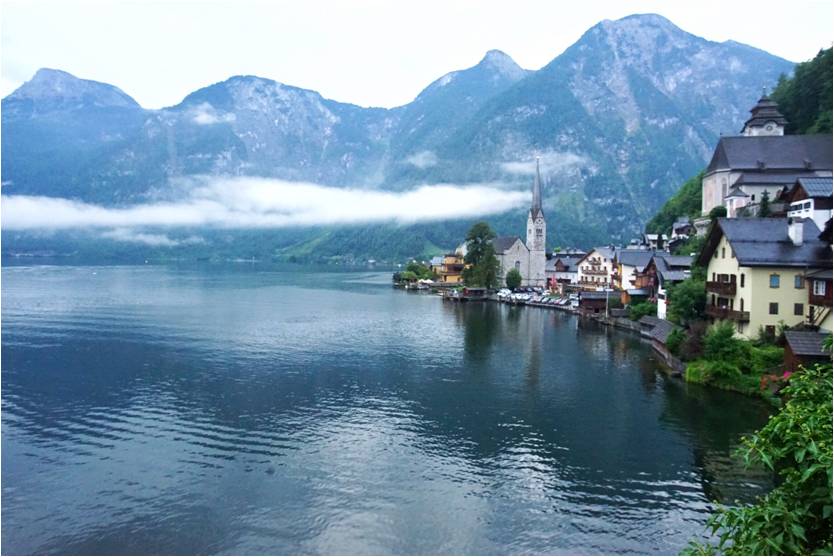