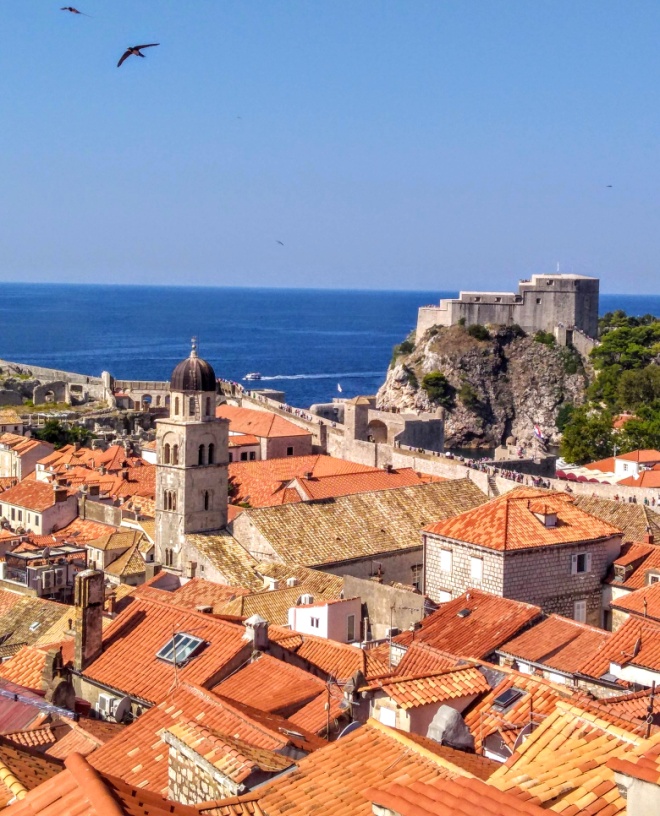 Croatia is a great place to visit. Dubrovnik is very touristy and with new nonstop service from American next Summer between Philadelphia and Dubrovnik, it could get worse. Even so, it’s worth a visit – just make sure you make time early in the morning to enjoy the walled city while it’s still asleep.

George Bernard Shaw wrote, “Those who seek paradise on earth should come to Dubrovnik.” But if any place is in peril of becoming a victim of its own desirability, it would be Dubrovnik. In 2017, almost ¾ million tourists from 539 cruise ships exerted tremendous pressure on the 1,157 residents (down from over 5,000 just 25 years ago!) of this town popularized as Kings Landing on HBO’s Game of Thrones series. After UNESCO threatened Dubrovnik with the loss of its World Heritage Site status, the city formulated plans for managing sustainable tourism while preserving a high quality of life for residents. As Romana Vlasic, Director of the Dubrovnik Tourist Board, says, “If you…turn everything into souvenir and ice cream shops, then in the next generation you won’t have people living here. Tourists want to see how people actually live….” (The Telegraph, August, 2018) I don’t wish to discourage anyone from visiting this amazing destination. I just want readers of The Flight Deal to appreciate the immense challenges facing Dubrovnik.

I leveraged the relationship I had built with Maja Benzon, the Rick Steves-vetted guide who organized our visit to Split, to find a guide for Dubrovnik. She referred me to Ana Lasica, a Ph.D. student who also belongs to the Dubrovnik Tourist Guides Association and the Dubrovnik Crafts Association. Ana is trying to establish her own “tourist craft” business, T. O. Lasica. Like Maja, Ana was extremely responsive and patient with my many questions, putting together an itinerary for us that included each attraction and restaurant described below.

Run the numbers on the Dubrovnik Card

The Dubrovnik Card promises “savings of more than 50%” but is purchasing one the best idea? There is no unequivocal answer to this question; it depends on how much time you have, what you want to see and whether you will use public transportation. This card provides free entry to the attractions listed below.

So, if you have just one day during which you want to walk the city walls and see any one (or more) of the attractions above, you come out ahead buying a single day Dubrovnik Card. If you will be staying at least 3 days, multi-day cards are available which include suburban bus transportation to Cavtat, a charming escape from crowded Dubrovnik. A 3-day Card costs 250 kuna; a 7-day card is 350 kuna. Tip: If you buy a voucher for your Dubrovnik Card(s) online, you save 10% off the prices in this paragraph

Church of the Holy Savior 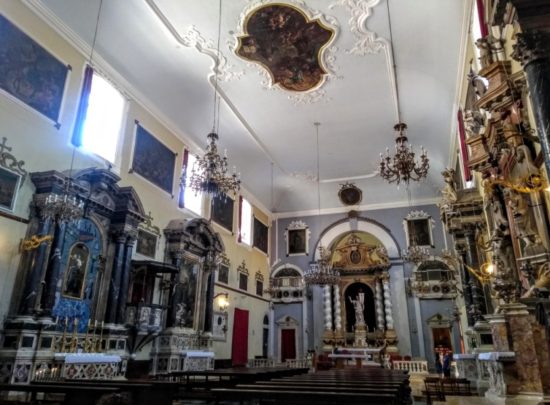 Interior of the Church of the Holy Savior, Dubrovnik – Photo: (c) 2018 – Jim Fatzinger, The Travel Organizer

Most visitors will enter Dubrovnik’s Old Town through the Pile (pronounce “pee-leh”) Gate which Game of Thrones fans are likely to recognize. As you enter Old Town Dubrovnik through this landmark, the Church of the Holy Savior is on the left, at the head of Stradun, Dubrovnik’s main street. The town fathers ordered its construction in 1520 as an expression of gratitude for being spared from an earthquake that shook Dubrovnik earlier the same year. It survived another earthquake 147 years later which killed some 5,000 citizens and, thus, has been preserved in its original state. Inside, there is a magnificent painting of the Ascension by Pietro Antonio da Urbino (1528). Admission is free.

Ana advised me in one of her early e-mails, “You cannot come here and not visit the walls; that would be like going to Rome and not seeing St. Peter’s Basilica.” She was right; Dubrovnik’s monumental city walls are truly spectacular! At 1.2 miles long, they almost completely encircle the town. There are 3 entrances to the walls: just to the left of the Church of the Holy Savior as you face it, at the Ploče Gate near St. Luke Fortress and at St. John’s Fortress, home to the Maritime Museum. 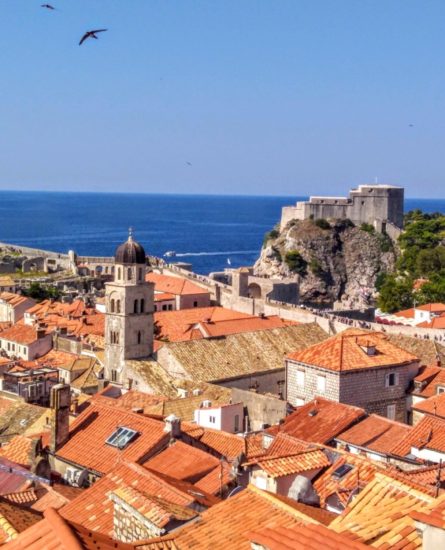 Tip: Strategically, it is best to begin your walk at the Ploče Gate entrance. This allows you to walk the entire length which usually takes about 90 minutes although you can leave at any entrance. Starting here also has the advantage of getting the climb to the highest point on the walls, the Minceta Tower (which looks like a rook on a chess board) out of the way early. As you look down on the town, pay special attention to the rooftops. The darker, uniformly tiled roofs mark buildings (about two-thirds of Dubrovnik’s Old Town) bombed during the Croatian War of Independence in 1991. The Fortress of St. Lawrence (Lovrijenac) is perched on a 120 foot high rock outcropping across from the city.

Tip: The walls have lots of steps and very little shade. The few refreshment stands along the way are overpriced. The walls open at 8am daily except from November through March when admission begins one hour later. Start your walk as early as possible, carry a bottle or two of water and wear something to protect your head from the Mediterranean sun.

According to legend, St. Francis of Assisi advised church leaders that the Venetian republic (which ruled Dubrovnik in the 13th century) would be independent as long as it remained pure. Whether the legend is true or not, it is a fact that Dubrovnik forbade Orthodox Christians and Muslims from living inside the city walls in medieval times, let alone erect a house of worship. As Eastern influences increased, construction of the Serbian Orthodox Church of the Holy Annunciation began in 1865. Although consecrated in 1877, the church in its present form was not completed until early in the 20th. The church turned the neighboring palace of the Bundic family into a museum exhibiting valuable icons from the 15th to 19th centuries. The focal point of the church’s interior is a painting of the Last Supper above and behind its gilded rood screen. 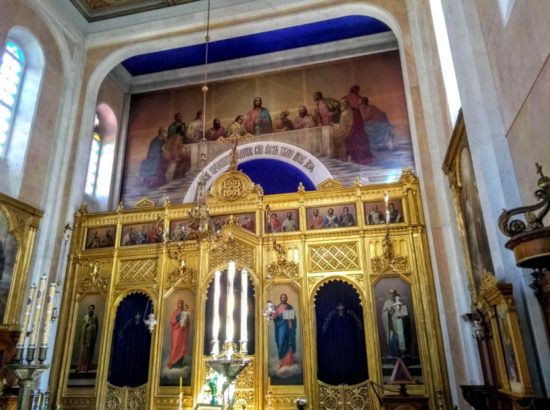 The narrow street opposite the Rector’s Palace opens onto a small square (Gundulićeva poljana) where a mostly authentic market co-exists with trinket shops and tourist traps that have sprung up in recent years. Look for the distinctive blue and white-striped chairs and table umbrellas on the square to find this family-owned and very affordable restaurant, frequently included on lists of the “top 10” restaurants in Dubrovnik.  Kamenice (Kamenica) means “oysters” in Croatian and the ones served here are the renowned Ston oyster, harvested from Mali Ston Bay on Croatia’s Dalmatian coast.  Kamenice is also known for its mussels in white wine sauce (which my wife, pictured here, enjoyed) and its “fried small fishes.” Either costs just 60 kuna or $9.42.

Tip: Stands at the morning market are known to sell plastic bottles filled with home-brewed rakija, a liquor (40 proof or more) made from the fermentation and distillation of local fruits, vegetable and herbs. It’s sort of the national drink. 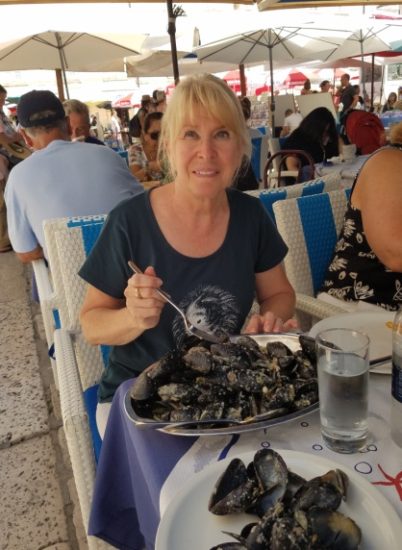 If you can, plan your visit outside the peak summer tourist season; the crowds will be much smaller, prices will be lower and you’ll put less strain on Dubrovnik’s infrastructure. Support the local economy by staying here for a few days, eating in full-service restaurants (like the one highlighted in this report) and supporting stores owned by locals rather than the trinket and gelato shops that fill spaces vacated by former residents who have fled the Disney-fication of their city. Follow these tips and you’ll have a more authentic experience while helping to preserve this gem (Shaw also called Dubrovnik “The Pearl of the Adriatic”) for future generations. 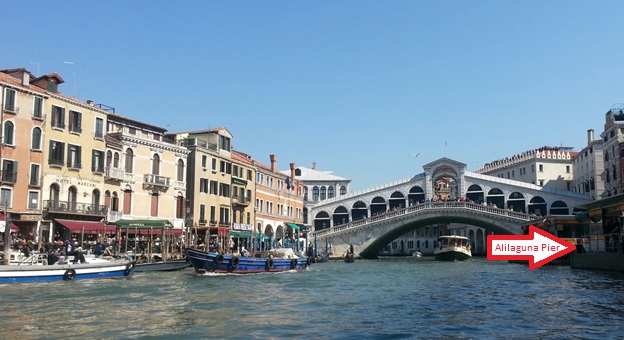 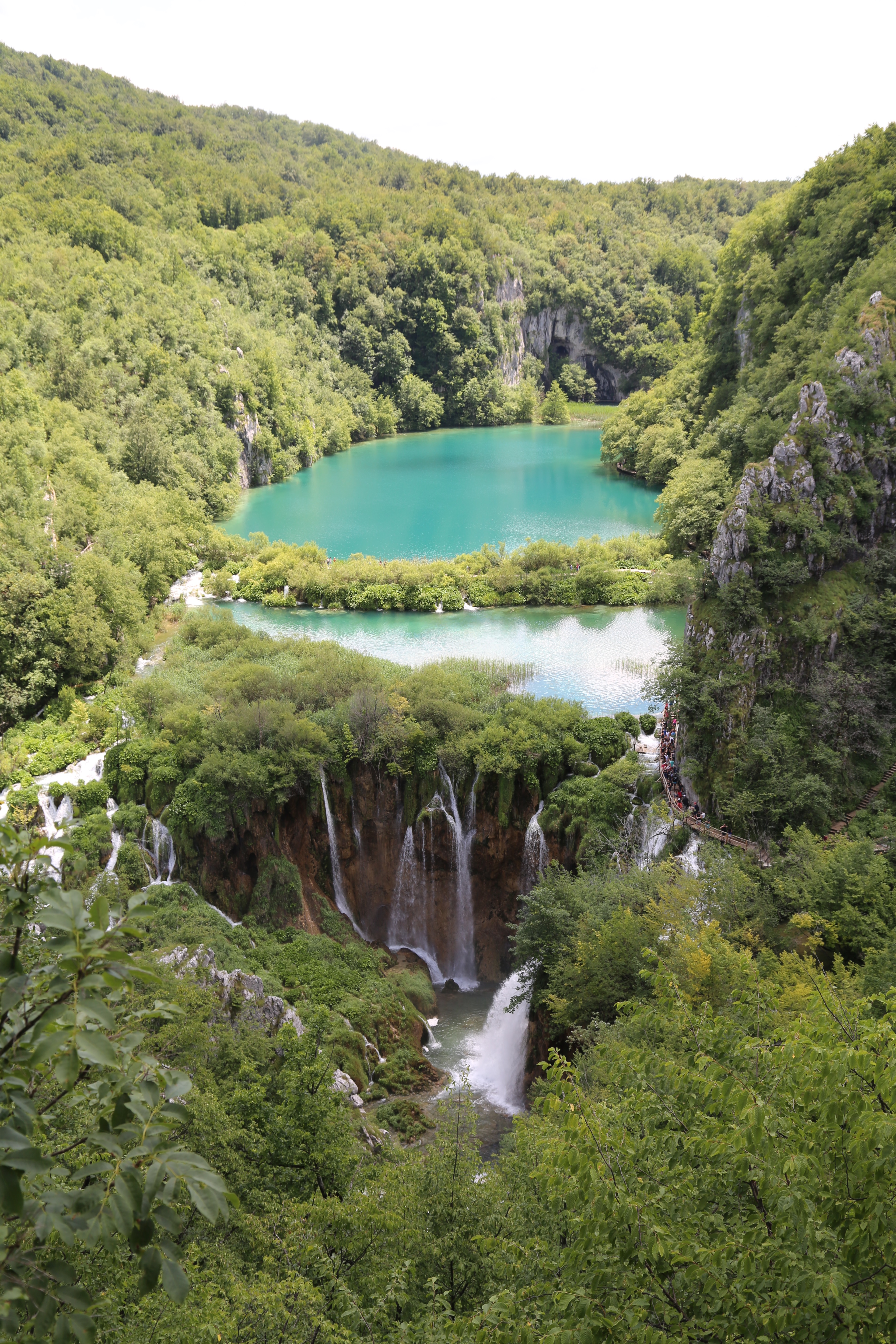