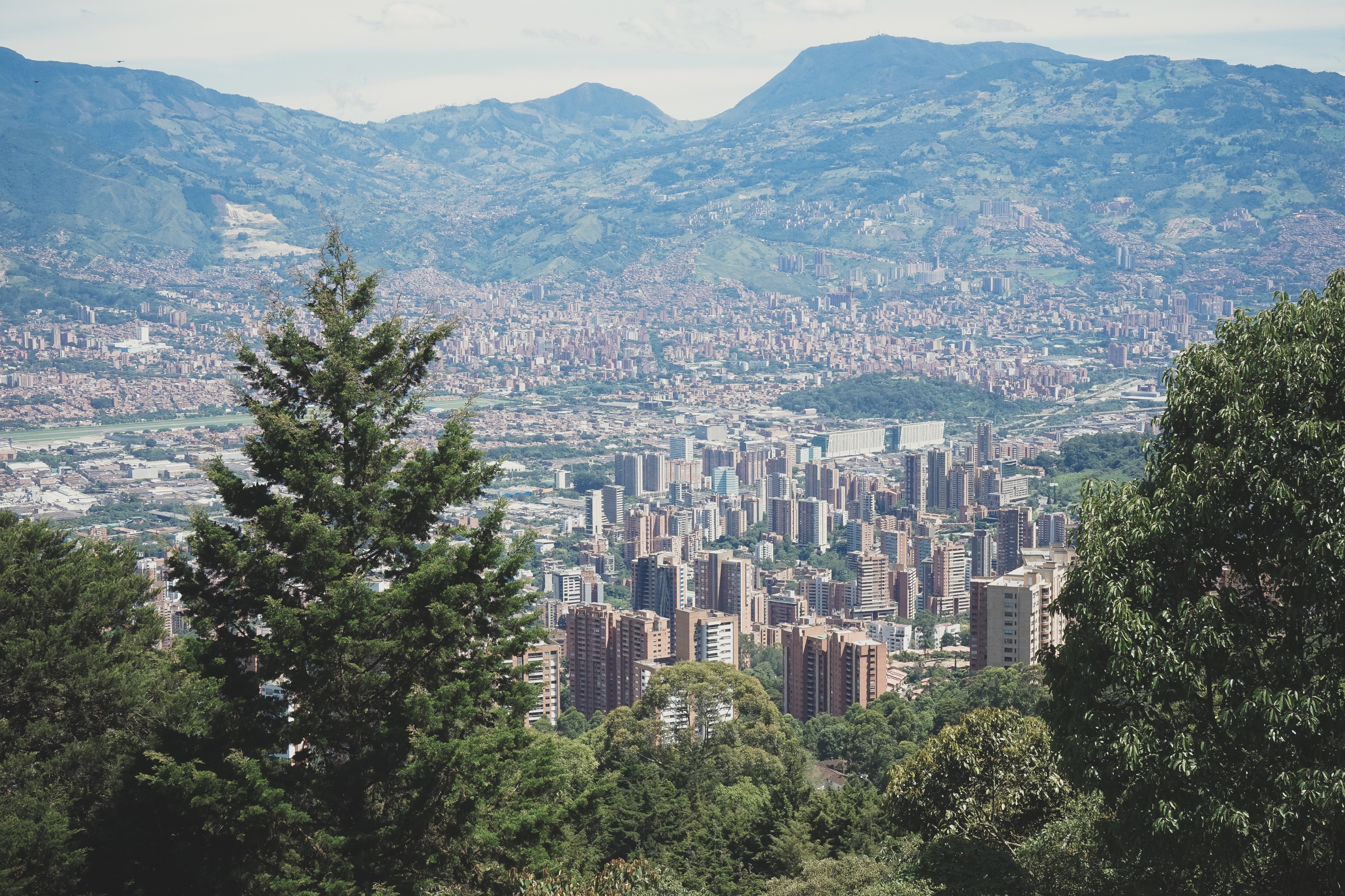 Medellin has been pretty much on every list as the “IT” destination. We haven’t been yet but will visit the next time there’s a deal.

Preethi Chandrasekhar of The Eager Traveler, who last wrote last wrote about Carmel, California, Portugal, Austria, Czech Republic,  Anguilla and Dominican Republic, recently went and here are her tips to Medellin should you visit.

Lonely Planet, one of the world’s most respected travel guide has named Colombia 2nd best country to visit in 2017.  My first introduction to this country was several years ago when after reading Colombian author Gabriel Garcia Marquez’ Love in the Time of Cholera, I set foot into the walled city of Cartagena. As I moved through the old town, pages of his novel came to life, setting the tone for that trip. Under the cloak of that book, I discovered a colorful, romantic city where Latin music and dancing greeted me at every corner. Fast forward to present day where I decide it’s time to visit a different side of Colombia, away from the coast. This time I travel to the region of Antioquia, within the Andes mountains. There lies the city of Medellin – my destination. A city that was once the most dangerous city but today is known as the City of the Eternal Spring, the capital of Antioquia and home to famous Colombian sculptor – Fernando Botero. 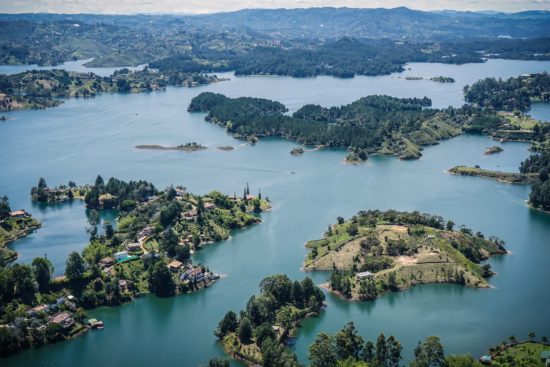 I flew from San Francisco into Medellin with a stopover in Panama City for about an hour. I arrived into Medellin in the afternoon and opted for a taxi transfer from the hotel I was staying at. The one-way trip cost me $26.

The best way to get around Medellin is the metro which is incredibly clean and cuts through the city from north to south. The metro cable connects you to the neighborhoods in the surrounding mountains, including the lovely Parque Arvi.

If there is one place I recommend staying in Medellin, it is the Hotel Charlee. Located in the Poblado area (considered the safest in Medellin) the hotel is right in front of the Lleras park and the Zona Rosa area. The Zona Rosa is a vibrant area full of restaurants and bars and is very conveniently located to the hotel. The Charlee is a five-star establishment with rooms that are spacious and include a separate living room area and large windows that overlook the city. The living room is like a tropical indoor courtyard with sofas and chairs and plenty of light that pours in from the oversized windows. Some rooms come with a Jacuzzi, but for those of us who cannot afford such a room, we simply take advantage of the hottest rooftop in the city, located right inside the hotel. 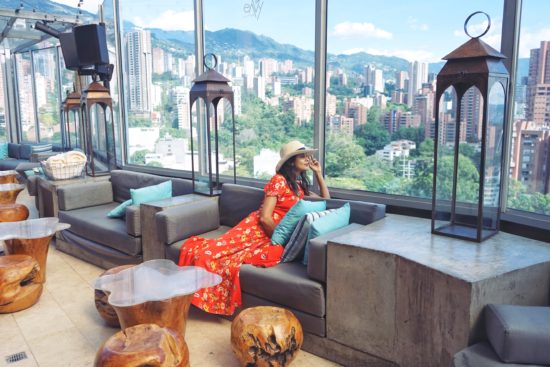 The Envy rooftop is everything you could want on a warm afternoon or evening in Medellin. Divided into two levels, the top floor has plenty of seating and overlooks the DJ booth and panoramic city views. The bottom floor boasts a trendy vibe with the pool, bar, seating spaces and string lights that create a charming atmosphere. 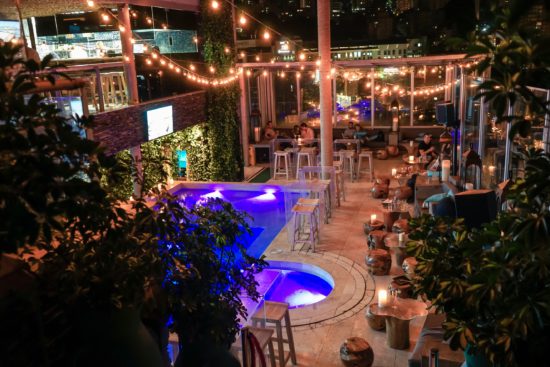 The hotel’s Lucia restaurant offers a buffet breakfast, lunch and dinner. The Envy rooftop also has small plates, and a Sunday brunch that I unfortunately wasn’t able to take advantage of!

For those of us who like to stay active on vacations, the hotel boasts the Ultra Wellness Center consisting of training machines, classes and an outdoor Jacuzzi that fits close to 15 people! The hotel is really a lifestyle hotel where all your needs are met while on vacation or work.

How is the service you might ask. One word – exemplary. We needed allergy medication in the middle of the night and in fifteen minutes the front desk had someone delivering the meds to us from an outside pharmacy. That’s the magic of Hotel Charlee.

Medellin is fast becoming one of Latin America’s hottest food scenes. The most traditional dish of the Antioquia region is called the Bandeja Paisa which is a mix of rice, red beans, pork, beef, sausage, avocado, plantain, egg and arepa. With that said, if there is only one dining experience you opt for, let it be OCI.Mde.  Located in the Poblado area, it’s a space built from industrial and recycled materials. “Long cooking times” is one of their specialties so don’t miss the 12 hour braised ribs in lemon and chili caramel sauce. I will never forget their Moroccan bread with beef – cooked 12 hours – accompanied with cabbage jam, pickled beetroot, and burnt chili mayonnaise. My tongue was dancing in delight. The space is open, inviting and casual.

Sopa de Mondongo is a hearty soup dish made from diced tripe, slow cooked with vegetables. Sancocho is also a soup consisting mainly of chicken and potatoes.

Colombia is well known for street food and Arepas are a staple throughout the country. In addition to street food, the country is a mecca for tropical fruit, many of which have exotic names I had never heard of. All over Medellin you will find ladies with their carts serving fresh fruit in cups. And due to the abundance of fresh fruit on hand, those of you who love fruit juices are in luck. You won’t have to go far to find a jugos.  My addiction while in Medellin became the Limonada de Coco – coconut milk, lime and ice. I could drink two in a row, that’s how good it was!

FIVE REASONS WHY MEDELLIN SHOULD BE YOUR NEXT DESTINATION

You have to see the Medellin of today to believe the transformation. Pablo Escobar no more roams the streets of Medellin, he rather just hangs out on your television screens (if you watch the television series “Narcos” based on his life). Medellin today has a sense of hope in the air. After the peace agreement between the government and FARC (Revolutionary Armed Forces of Colombia), a ceasefire of sorts is in place and the violence has died down. Instead, a quiet pride has developed within the people of Medellin. Take for example the development of the metrocable. The metrocable is a gondola lift system designed to reach some of the city’s settlements in the steep hills. It’s considered to be the first urban cable propelled transit system in all of South America. Many of Medellin’s hills are home to often underdeveloped barrios and cannot not be reached by the metro. Before the implementation of the metrocable, the residents of the Santo Domingo barrio for example would often spend upwards of two and a half hours walking to work each way or relying on infrequently running buses. That’s a solid five-hour round trip commute! In order to truly understand this topology, take a ride on this metrocable up to the Santo Domingo barrio and you will realize just how steep these hills are. Now imagine walking up these hills every day from the city after work. The lack of sufficient transport, and public services inhibited development and employment opportunities for the residents. This lack of opportunities and access to the labour market eventually led to the marginalization of the people living in these hillside neighborhoods, resulting in higher violence and crime.  People felt stuck and couldn’t get to the center of town easily. The introduction of the metrocable changed that dramatically. The integration of this system with other forms of mass transit have helped connect low-income residents with the city, increasing their sense of value, and pride and in turn this has reduced the violence and crime in these areas. The metrocable is a brilliant example of social inclusion.

Go during the day and take the metrocable to the Santo Domingo stop. Get off here to admire the sweeping views of the city and then take the metrocable farther to Parque Arvi. This ride to the park will have your jaw dropping in awe at the vast forest land that encompasses this beautiful park. Once you get to the park plan to spend 2-3 hours to truly experience this tranquil environment. There is even a small market up there that sells beautiful local handicrafts. Tip: Using the metrocable, at the Acevedo station take the metrocable Line K to Santo Domingo and transfer to Line L. The park is open to the public from Tuesday to Sunday 9:00am-6:00pm. Wear comfortable walking shoes, bring a jacket and definitely some sunscreen. 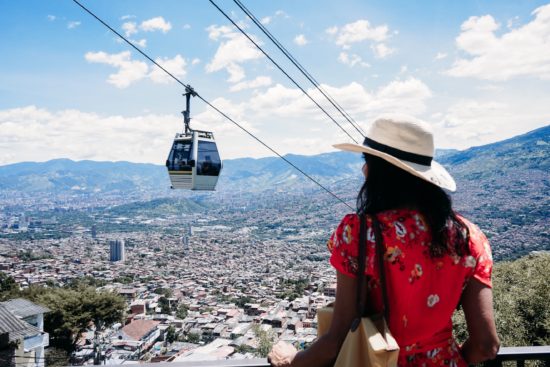 View of Medellin and the metrocable from the Santa Domingo lookout point – Photo: (c) 2018 – Preethi Chandrasekhar of The Eager Traveler 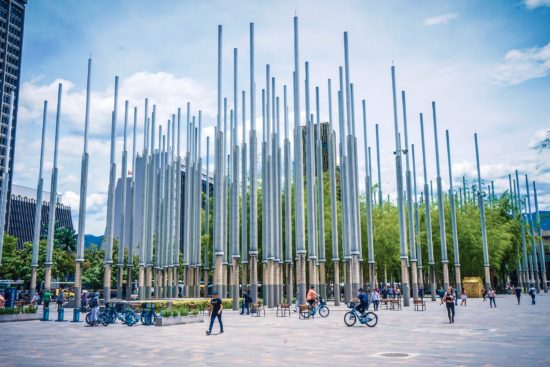 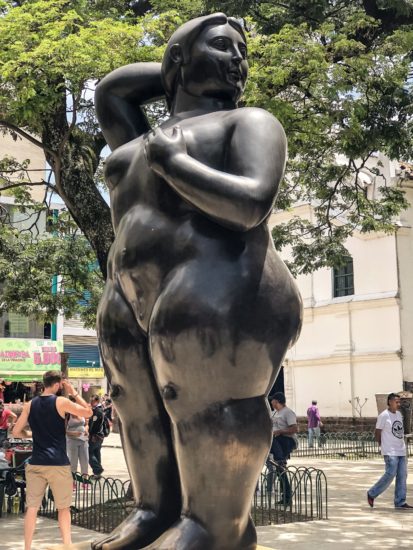 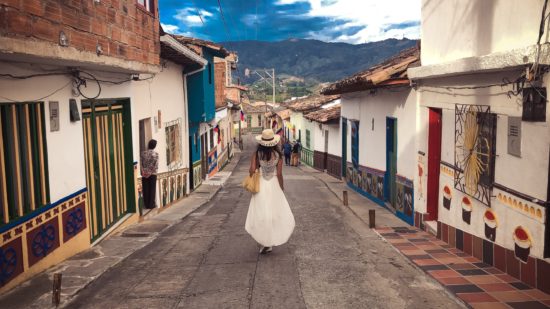 When the people of Medellin look back into the past, there are no sad memories according to Julio. He says the people have a remarkable memory switch, they just turn it off. They take small moments of happiness and transform them into massive reasons for celebration. The metro for example is more than a means of transportation – it’s a transformation. You won’t see graffiti or trash on the floor, inside the metro everyone behaves because of what it represents. Julio says “if we Colombians can be happy in spite of our own difficult circumstances, can’t everyone else in the world be as well?”  He has a point! The perception of Colombia as a dangerous country may be a challenge to shake off, but I felt completely safe and incredibly welcome. As Daniel from The Andes Adventure would say, “don’t give papaya”, which is a translation of a Colombian saying which basically means don’t let yourself be taken advantage of. So just like you would in any other city, be aware of your surroundings and don’t venture into desolate alleys after dark. Colombia has its arms held wide open, don’t be afraid to be enveloped by its authenticity.  If you’re ever in Medellin, make sure to contact Daniel for an immersive look into Medellin. The journey will become more than just random sights and landmarks. Medellin and its history, culture, and people come alive with Daniel. His passion for his country is unmistakable. Colombia’s resilience to transform itself is undeniable. And Medellin’s reputation as most dangerous city to most innovative is indisputable. 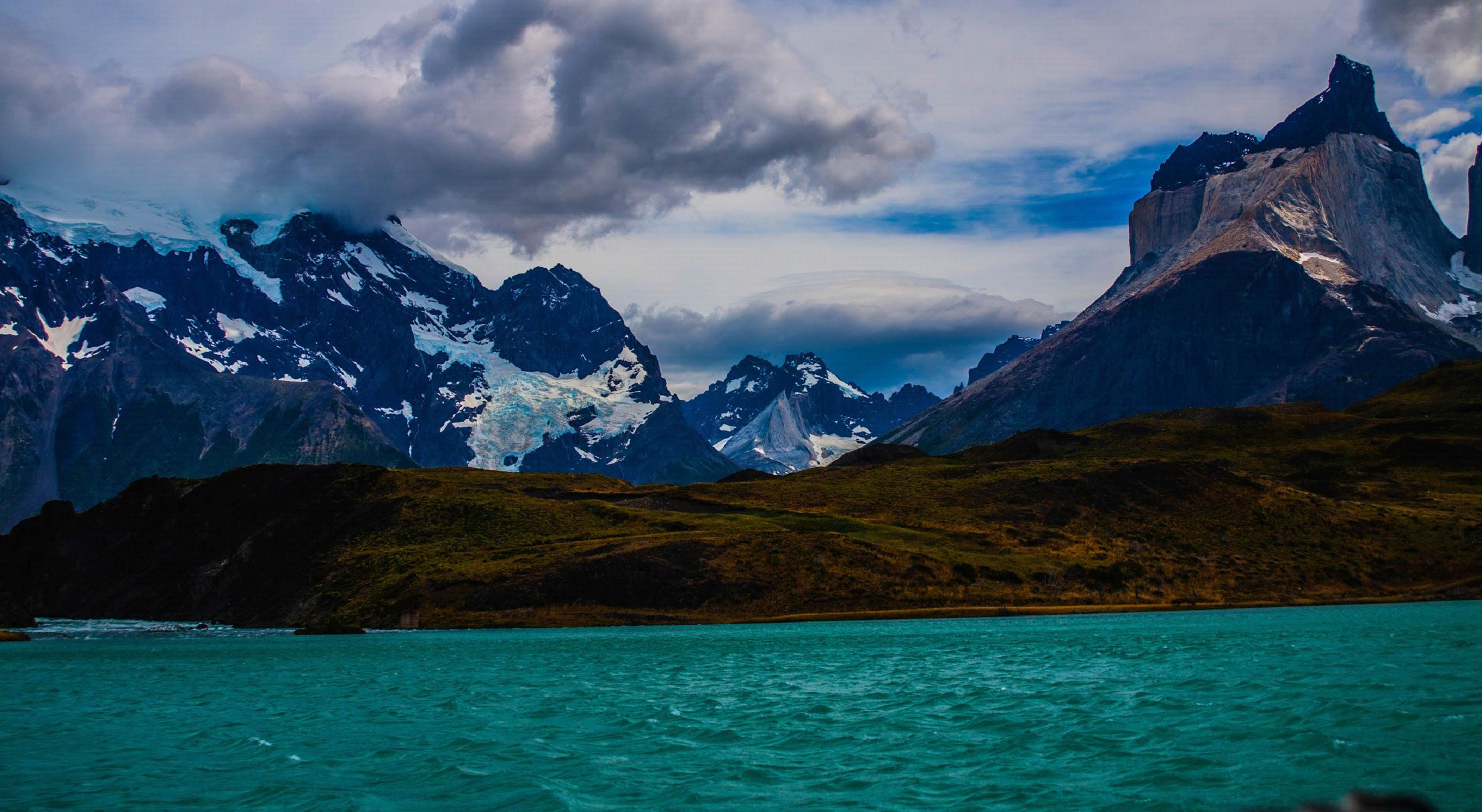 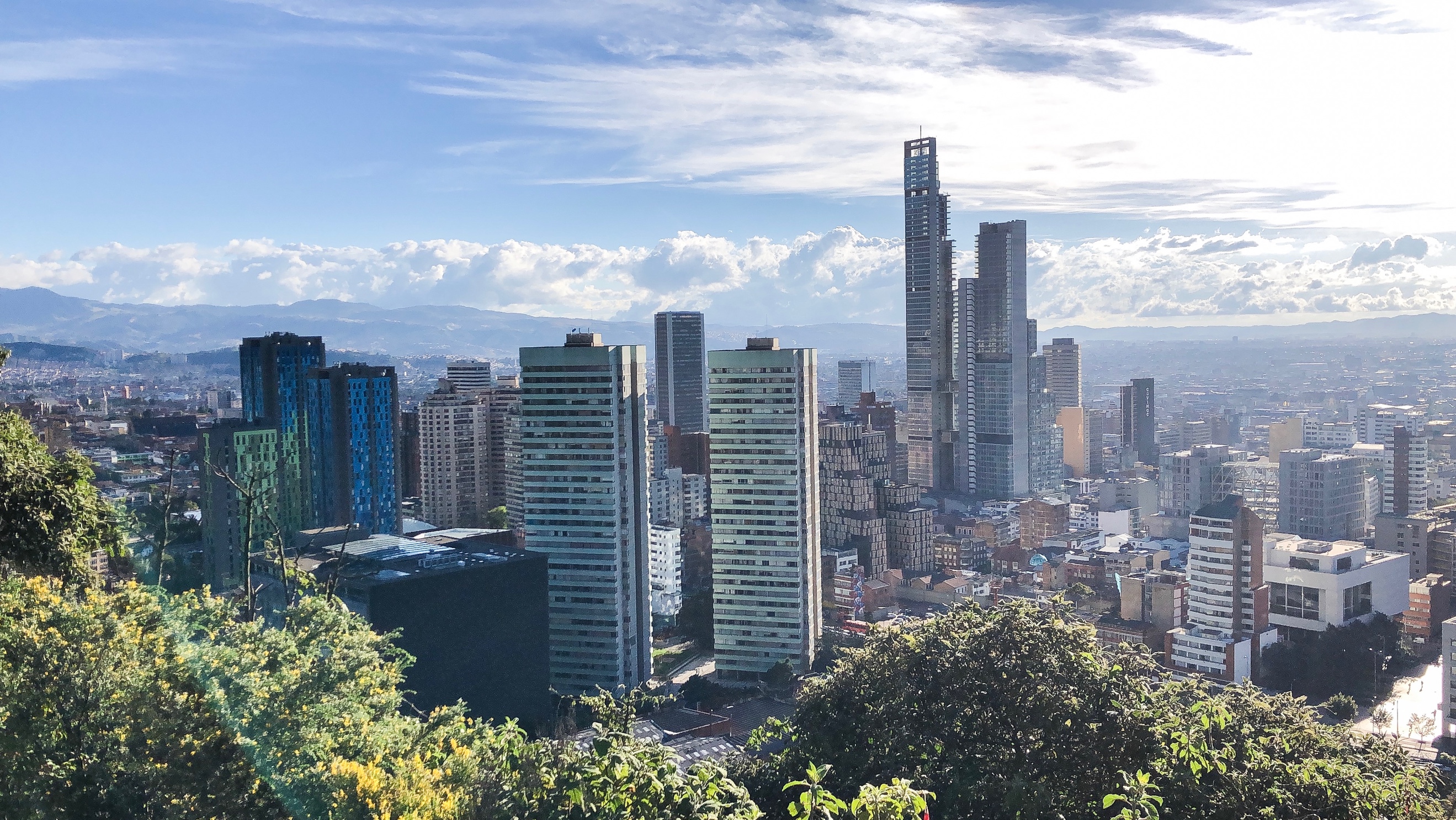