Kazakhstan is on our list of places to visit. At our San Francisco Meet and Greet earlier this month, Jonathan Khoo was gracious enough offer a write up on his recent trip to Kazakhstan. Follow Jon on Twitter—he’s always going someplace interesting. Thank you so much, Jon for putting this together for us.

Located in the heart of Central Asia, Kazakhstan is a vast country (over one million square miles, roughly the same size as Argentina) and has two major cities, Almaty and Astana which happen to be its old and new capitals. Almaty is the larger one and is the country’s cultural, economic, and population center. Astana — purpose-built to be the new seat of government and full of fanciful manga-esque modern architecture (its main draw, at least for me) — became the capital in 1997. Much of the country is sparsely inhabited and echoes the country’s nomadic history which stretches to the era of the Silk Road and beyond.

As part of the former USSR, and the last one to declare its independence in late 1991, there is still a palpable legacy of Russification, perhaps most significantly in the Cyrillic script used to write Kazakh (a language related to Turkish), and the fact that most people also speak Russian. While most wayfinding signs are bi- or tri-lingual (with Kazakh, Russian, and English), it’d help to brush up on your Cyrillic letter recognition, and practice your “spasibo” because you will most likely be addressed, and interact in, in Russian, although English, at least at a basic level, is pretty prevalent in the cities.

Kazakhstan has a visa-free program on a trial basis for US passport holders as well as many European countries (which many expect to become permanent); there was, when I went, a special passport line for visa-free trial countries at Almaty airport; it was hassle-free.

You will be further east than expected (or, at least, I expected) — timezone-wise it’s half an hour ahead of India and two hours ahead of Dubai.

It’s important to note that airlines you’re familiar with may either not fly to Kazakhstan or have limited schedules. More than likely you will be flying in to Almaty International Airport, where Air Astana and SCAT both have hubs. WHO?! Air Astana is the up-and-coming flagship carrier of the country and their mid- and long-haul flights even have amenity kits in economy class. SCAT (yep, short for “Special Cargo Air Transport”) is a decent airline despite the name. Note that the EU has banned all Kazakh-registered airlines from flying in its airspace due to safety concerns except for Air Astana which is allowed thanks to a loophole. In terms of more established players, Turkish Airlines has a couple flights a day from Istanbul to Almaty; most others only have one a day if not every other day. 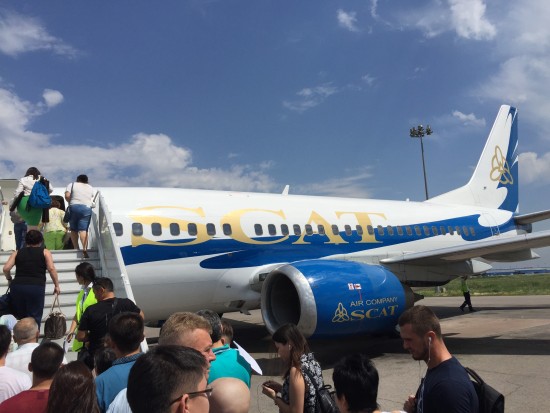 In case you’re wondering how I got there, I had a cheap flight to Moscow, then took an Air Kyrgyzstan red-eye to Bishkek, did a day tour there, then flew Air Astana to Almaty where I stayed for a week (working half the time, so you will probably want fewer days there). From Almaty I flew SCAT to Astana, stayed overnight and got a look around town, then Air Astana back to Moscow.

It can be quite difficult booking a ticket on some of these airlines because the online payment processing systems do not like American credit cards; you can read more in a post I wrote about it. Be sure to shop around though as prices can vary wildly on different sites.

Both Almaty and Astana airports have taxi service kiosks which you can use to prepay for a taxi ride to town. Almaty has it after arrivals; Astana also has one in the baggage claim area. Both are around $20-25. Using these services will keep you from being accosted by drivers later on. Both airports are fairly new but basic; don’t expect much in terms of amenities or lounges.

I picked up a SIM card from Beeline at the Almaty airport — $16 for 2GB of data, which according to the representative was the minimum amount of data. Service was pretty reliable. There are some 4G providers coming online now; in fact the internet connection at my Airbnb was via a 4G hotspot and was much faster than expected.

The currency is the tenge, and 100 tenge is about 33 US cents. ATMs are plentiful but so is credit card acceptance at stores and at restaurants. I even was able to use Apple Pay there. If you plan on taking public transportation (see below), be sure to make change often and keep smaller bills and coins handy.

The center of Almaty is fairly compact, although there is a very modern subway which, while you may only use one or two stops, may be worth it because it’s only 80 tenge, flat rate. Buy tokens from the cashier and drop it into the slot at the turnstile (they’re not RFID, though the setup may look like it). 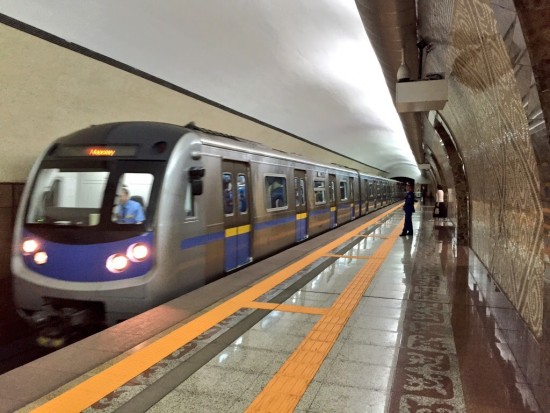 Buses, also 80 tenge, are also handy in Almaty, not only to get around in town but especially to get to the Medeu sports complex in the mountains to the south of town. If there is a machine on the bus (located behind the driver), pay the machine and keep the receipt. If there is a conductor (usually in a blue smock), pay her (usually a female) as you near your stop or as you exit.

Shymbulak Ski Resort, in the mountains outside town above the Medeu ice skating rink and sports complex, (the highest in the world) in Almaty, Kazakhstan – Photo: (c) 2015 Jonathan Khoo

Beware of the narrow irrigation ditches that run alongside the streets in Almaty, known as aryks. I stepped in one when I wasn’t paying attention and twisted my ankle pretty badly.

In Astana, all of the major architectural buildings and shopping are along one long axis. Monuments and museums are a bit further afield and there is frequent bus service along the major arteries.

Unfortunately in neither city do Google Transit or Here Maps Transit work for point-to-point directions (walking, yes). The best online resource for bus information that I’ve found is wikiroutes.info, but either way you will want to follow along on Google Maps to make sure you get off at the right stop.

Except in Astana (where you have a Norman Foster-designed mall shaped like a giant tent, with a beach inside), there are not many easily-accessible centralized places for retail shopping. Fairly large supermarkets can be found easily in Almaty. If you’re feeling adventurous, bottled fermented camel and horse milk are available in stores. Restaurants range from holes in the wall to fancy steakhouses (horse!) for the nouveau-riche. Be sure to try laghman (a thick noodle dish) and shashlik (meat on a stick), and manti (dumplings). If you are hungry and want an easy, reliable cheap meal, look for the Kaganat (Қағанат) chain which serves staple comfort foods cafeteria style.

The Green Market (closed Mondays) in Almaty is a large warehouse-style central market with all manner of local food, produce and meat for sale; cheap restaurants are available inside as well. 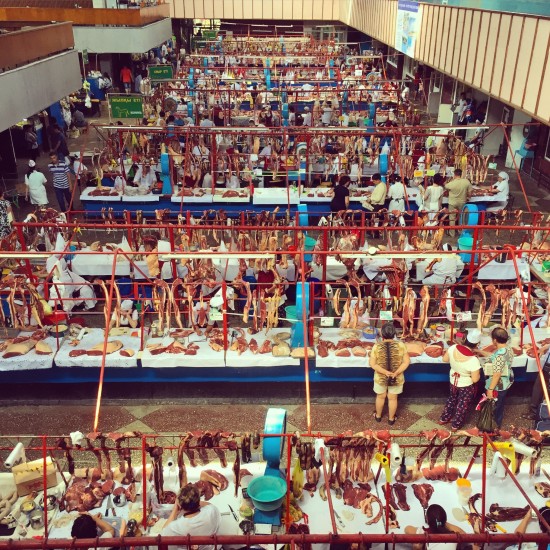 If you go up to the Shymbulak Ski Resort (I highly recommend the full set of gondola rides to the top), there is an entire lodge complex with restaurants open even during the summer. Prices are a bit higher than in town but you can’t beat the setting.

Jonathan Khoo is an avid traveler; he’s finally taking advantage of his location-independent job after many years, with a new destination every month. He maintains Wanderlusty, a small blog about his travels, where you can find more details about his trip to Kazakhstan. He usually flies in economy (*gasp*) and believes in quantity (more trips) over quality (flying in business or first). 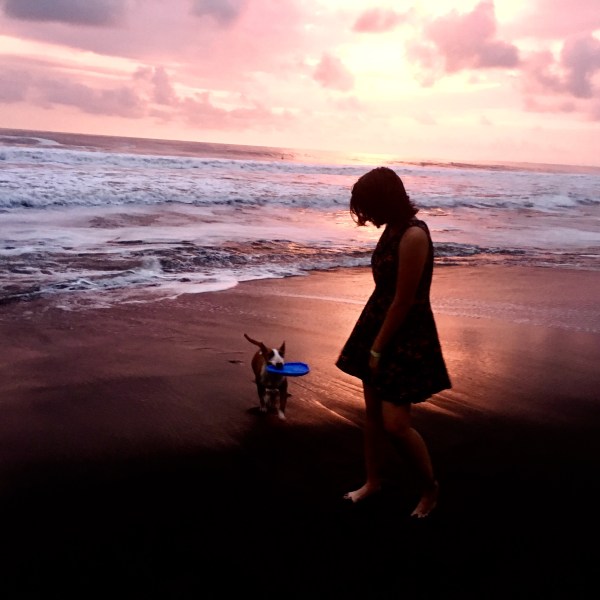 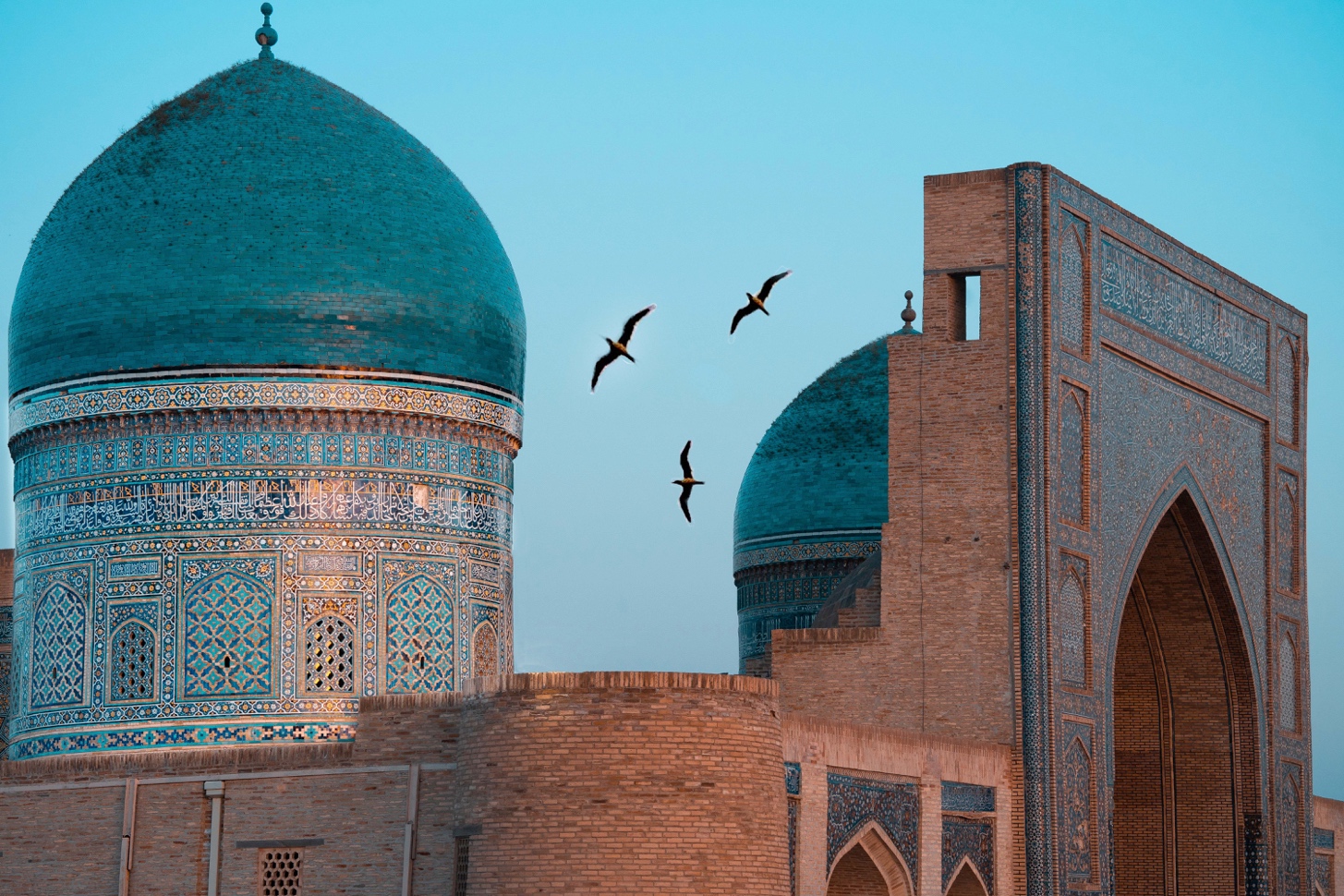